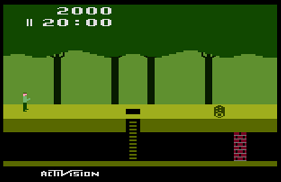 Pitfall! is a video game released by Activision for the Atari 2600 in 1982. It is the second best-selling game made for the Atari 2600 (after Pac-Man), with over 4 million copies sold.
The player must maneuver a character (Pitfall Harry) through a maze-like jungle in an attempt to recover 32 treasures in a 20-minute time period. Along the way, he must negotiate numerous hazards, including pits, quicksand, rolling logs, fire, rattlesnakes, scorpions, and crocodiles. Harry may jump over or otherwise avoid these obstacles by climbing, running, or swinging on vines. Treasure includes gold and silver bars, diamond rings, and bags of money. Under the jungle there is a tunnel which Harry can access through ladders found at various points. Travelling though the tunnel moves forward three screens at a time, which is necessary in order to collect all the treasures within the time limit. However, the tunnels are filled with dead-ends blocked by brick walls, forcing the player to return to the surface at one of the ladders, and try to find a way around again, thus wasting time. The tunnels also contain scorpions, which can harm Harry.
Pitfall! was created by David Crane, a programmer who worked for Activision in the early 1980s. The game's technical achievements included non-flickering, multicolored, animated sprites on a system with notoriously primitive graphics hardware. Innovative techniques were used to keep the code space within the 4k limit, including a polynomial counter to create 256 screens within 50 bytes of code. The vines were drawn as a stretched "ball". Pitfall! is seen as an important early game in the side-scrolling platforming genre; although it did not scroll itself, it had all the features of such games, such as the ability to travel up and down on multiple levels of play. The game was also much longer than other Atari 2600 games of its time, which typically lasted only a few minutes. This was due to the majority of such games being ports of arcade games, where short play time encouraged players to spend more money. The twenty minute time limit was unprecedented, and marked an important point of transition between the arcade and home video game markets.

Click on the screenshot to try an in-browser emulated version of Pitfall!